The Learning Pro spends two days with an ELearning Hero.

I spent a couple of days last week in the company of experts and learners.

The experts were Tom Kuhlmann and David Andersen from Articulate 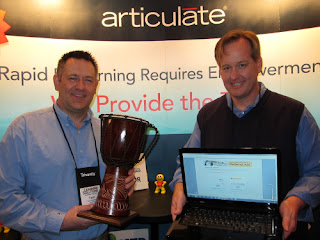 The first day had the title "How to become a Rapid E-Learning Pro'. I had heard how great this was when Tom ran the same workshop in Chicago last year for CCASTD and was looking forward to seeing it myself.

As ever I used twitter as my note taking tool and here are my combined tweets from that day.

The second day was "Getting Started with Articulate Storyline" and I had some pretty high hopes for this day as well.

I had heard of Storyline of course. I'd been an Articulate Studio user since 2009 and had heard from an ex colleague who was part of the Beta.  But could it really be that good? I saw a demo of the tool at ASTDICE in 2012 and nearly cried. Of course part of the reason for that was that I was working for SumTotal at the time and so constrained to using ToolBook So I would probably have cried at anything.

When I took my current contract, my customer had a Captivate 6 licence and so I took a look at that. The Interactions that they introduced meant that many of the failings of V4/5 were taken care of, or so it seemed. You could create a valid interactive learning experience in Captivate 6.1. As I was more focused on strategy that tactical delivery I left the tool choice alone.

But I did decide that once I'd taken a real look at Storyline I'd evaluate that question again, unless it was moot.

So I spent the day learning about the tool and taking twitter notes.

And now that the day has passed I'm looking to see just how big the savings might be. Because in just a couple of hours I created templates and used them to rebuild the first of the courses I'd built in Captivate.

Let me repeat that.

I spent about 3 hours.
In that time I rebuilt a captivate class that in Captivate would have taken me at least that long. AND about 50% of that time was spent setting up a theme and importing about 30 or so images of a 'presenter' into a character with 'states'  All this with a product that I had one day of training on. Now I didn't learn everything in that single day. But what I did not learn I found out using the Articulate Community Forums.

I think that Storyline is worthy of all the hype I've seen about it.

Let me give you a simple example.

Tab interactions.
Captivate 7 has a Tabs interaction widget. you can choose from between 17 pre arranged layouts and customize them all considerably. You can have up to 5 tabs and each one can have text, image and audio.
the problem becomes if you want more than 5 or if you want to have a common look and feel as each time to move from one preset layout to another all your color choices are blown away.  It takes me about 10-15 minutes for me to build one of those, dropping in the text, images and audio I want and setting all the colors to meet my client's color palate rules.

In Storyline I can build the same thing from scratch in the same time.  But I'm not limited to 5 buttons or even having them look like buttons. Then save it as a template and use it again, with enough changes to make it seem to the user as something totally different.

I know which product I will recommend to anyone wanting to build some eLearning.


One more thing.
The evening of the second day was spent with Tom & David presenting "The Power of Rapid E-Learning" at the monthly meeting of our chapter.

There were a few of us tweeting that one and here is the back channel in all it's glory.