Advocating for an industry 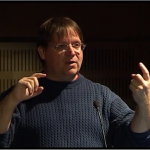 I had the pleasure earlier this week of spending some time in the company of Dr Allen Partridge.

Allen was in San Francisco yesterday presenting to ASTD members and guests for a full day workshop (that I missed half of due to Jury Service!) and a Chapter meeting in the evening.
Allen works for Adobe and his title is Senior Technology Advocate for eLearning. What a cool title.

So Allen was the perfect person to show us around the new capabilities that have been built into Captivate 8 and he spend the workshop focusing on responsive design and the ways that with the new tool you can build a course that looks good on a mobile phone screen, a tablet and a laptop or desktop sized screen as well.

For me however the evening was the most fascinating.
Because here he shared what he was hearing in those advocate conversations he has been having all around the world. I tweeted out a few notes  and they are captured here.

But the overarching theme, as I saw it, was this:

What exciting times we live in.

Posted by Alan Montague, CPLP at 7:29 AM